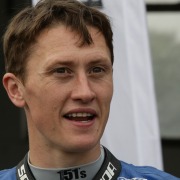 Born in Bradford in 1989, Dean Harrison isn’t your stereotypical sportsman. Because, unlike so many, Dean wasn’t riding bikes before he could walk. He wasn’t dragging his parents around the country to compete in age group races when he was still at primary school.

In fact, it wasn’t until his first year at Hanson School, Bradford that the interest in road racing that his sidecar racing dad, Conrad, had instilled in him, began to grow. Although even then, that interest was restricted to following race results, plastering his bedroom wall with posters of his favourite riders (David Jefferies, John McGuinness and Bruce Anstey should you be interested), and riding a Yamaha DT50 in fields around the back of Leeds Bradford Airport.

Astonishingly, it wasn’t until 2007, when 18-year old Dean (who by then was working as a mechanic in Shipley, West Yorkshire) bought his first racing bike.

He competed in his first race, the Auto 66 at Elvington, North Yorkshire, three months later; and from that second placed finish a career that not even Dean had anticipated was born.

COMPETING AT THE ISLE OF MAN TT

Just four years after that first race, Dean was competing in his first Isle of Man TT, posting a very credible 122mph and securing a 12th place finish. And in 2014 – just seven years after buying that first racing bike – he topped the podium at the world’s most famous road race for the first time.

In 2019 Dean etched his name forever in road racing history by winning the big TT race – the Isle of Man Senior TT. This at the end of a weather hampered fortnight during which he’d also achieved another three podium finishes.

Dean rides for Kirkby-Lonsdale based Silicone Racing, and extended his stay with them for an additional two years after the end of the 2018 season. In addition in 2019, Dean and Silicone are Kawasaki’s official road racing team. Dean is also competing in the British Superbikes Series – a competition he feels adds to his speed on road, as well as increases his standing and profile amongst the best riders in the world.