Cock of the North Scarborough

Motorcycle racing is not easy. As an amateur racer you spend days in the lead up to races running around for tyres, parts, waiting in for deliveries, working on your bike in makeshift garages, with poor tools to make the best of what you have for a very short amount of time racing.

I got my bike ready for the Cock of the North meeting at Oliver's Mount. Unfortunately after qualifying, it had other ideas, overheated and dropped water. After trying two other radiators one of which I repaired, both scrounged from Lewis Bramwell (Big thanks for your generosity) and plenty of advice from Dean H and his mechanics I gave up deciding it is probably the cylinder head gasket. So I became a spectator, this is the one thing I dislike more than spannering. 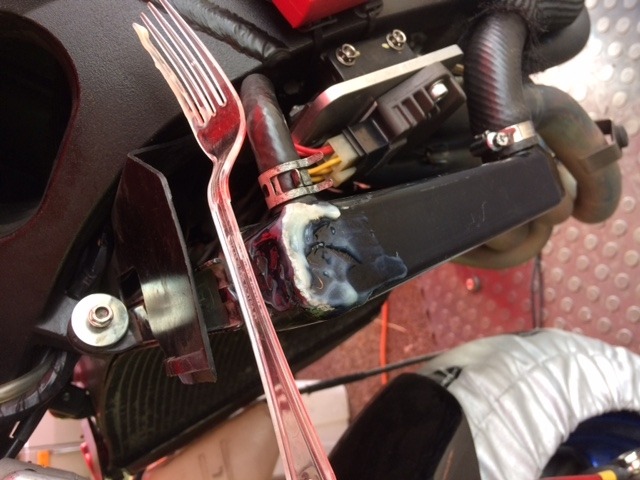 Araldite is a key component in a struggling racers tool box, I didn't have a spreader so the plastic fork was used. Professional !!

After spending hours on my knees doing 3 radiator swaps I was more tired than if I had raced. Yes it really did take that long as I am mechanically inept.

Olivers Mount is a different experience to short circuit racing, this is road racing. Practice is 4 laps and qualifying the same so you get no time to work the circuit out before you are into racing on the 2.4 mile lap. As with all road racing the consequences of mistakes are catastrophic so you have to build slowly here. So I was more gutted than usual not to be able to race as I need more track time here to drag myself up the field.

Our coach, Dean Harrison, cleaned up taking lap records in the Superbike and Junior (600). Christian Iddon popped in as he is injured and needs to occupy himself (Paul Iddon, Christian's Dad is Silicone Engineering's Team Manager) Dean had 3 mechanics, but he is an apprentice trained motorcycle mechanic and despite being around the paddock from a young age, as his Dad Conrad is a top sidecar racer, certainly hasn't had it handed to him on a plate. Conrad is a Postal operative (Thats P.C for Postman). I had a chat with Conrad and we discussed how difficult it is for working class kids to get into the sport. With young riders buying rides in BSB it is a concern Jamie also shares. 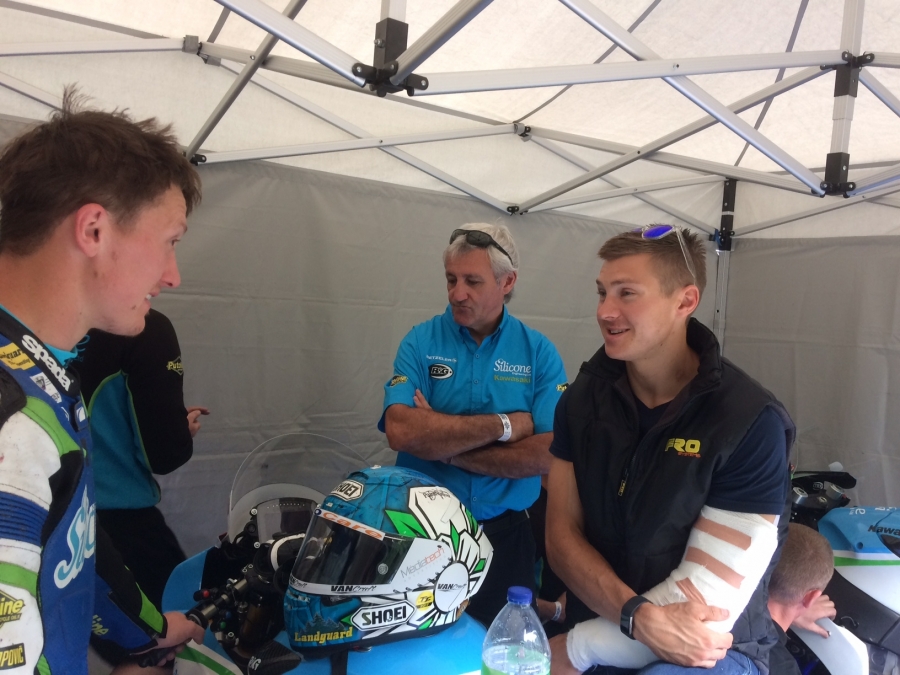 Lee Johnston had some treatment this week on his injuries to accelerate the healing process. A lot of racers are using various therapies which all have benefits supported by research. Lee had laser, oxygen and magnetic therapies all provided by Ian Dixon of Professional Bodies Laser Clinics. This is a mobile service which comes to your home. Lee said it definitely helped to reduce the bruising and pain he is still experiencing following his TT crash. We are back out at Mallory Park on Wednesday for a Track Training day with Richard Cooper, Taylor Mackenzie, Steve Brogan and Dan Linfoot coaching. James will probably coach as well as I can't keep him off the bikes! We've got some visitors from Suzuki bringing the new GSXR R version. John Reynolds looking after them so it should be a fun day.